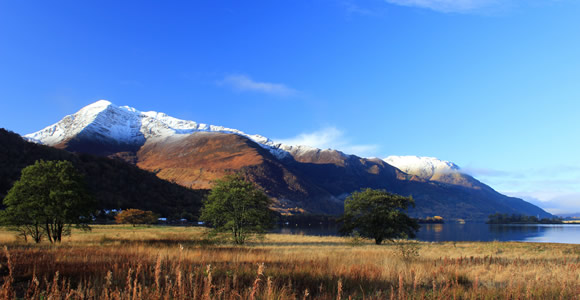 The mountains of Glencoe are built from some of the oldest sedimentary and volcanic strata in the world. They were subsequently moulded, sheared and repositioned by a geological event known as a ‘cauldron subsidence’ which took place 380 million years ago.

The effects of glaciation, and millions of years and many cycles of erosion have subsequently carved and worn the rocks away into the formation we know today. Glencoe is bounded on its northern side by the famous Aonach Eagach or ‘notched ridge’ – a pinnacled ridge linking three peaks over 3000 feet which stretches for over three miles. 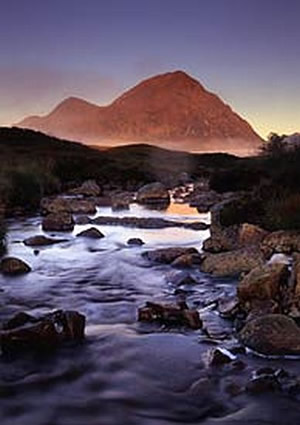 Indeed it is the narrowest ridge on the UK mainland. In contrast, the glen’s southern flanks are a complex assemblage of peaks, ridges and valleys which rise up above the peat hags and scattered lochans of Rannoch moor and extend to the shores of Loch Leven, some ten miles distant.

The mountains which first greet the visitor arriving from the south are the strikingly beautiful and instantly recognisable peaks of the Buachaille Etive Mor and Buachaille Etive Beag, – ‘The great’ and ‘The little’ Herdsmen of Etive. Magnificent though they may be, neither of these mountains is the reigning peak of the Glen or the district. That distinction belongs to the peak of Bidean nam Bian; whose main summit is hidden above and behind its more famous outliers, three great truncated spurs known as ‘The Three Sisters of Glencoe’.

The waters which tumble from these high mountains and give rise to a series of spectacular waterfalls gather initially at the ‘Meeting of the Three Waters’ to form the River Coe. Less than a mile lower down, at the very heart of Glencoe, the river widens briefly to form the sombre yet beautifully situated Loch Achtriochtan, a superb place from which to view the entire glen.

Beyond, the river passes through a further series of rocky channels and open pools to reach Loch Leven near the tiny village of Glencoe itself.

Lochaber Geopark Association has been established to raise awareness of Lochaber’s outstanding geology and geomorphology, of which Glencoe is a key part. Lochaber has recently achieved international recognition as a European Geopark. Ask for a copy of the Glencoe Geotrail leaflet which is designed as a brief guide to some of the geological features to be found in Glencoe.