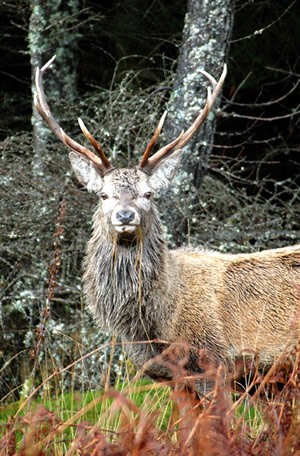 The wildlife in Glencoe is limited and probably due to the lack of natural shelter caused by high winds and rainfall of over 90 inches per year. The weather here is unpredictable, snow can lie on the high tops well into July, yet even some of the shortest of winter days can be surprisingly mild and bright. Some would say that it is the rapidly changing and unpredictable weather that gives Glencoe so much of its character!

The fox is a regular visitor on the higher mountain slopes along with the blue hare. The wildcat, badger and pine marten stalk the lower slopes but sightings are quite rare – the long-tailed fieldmouse, vole and common shrew are the mammals more likely to be encountered.

Red deer and roe deer are far more common than one would think and now probably constitute majority of sightings of four-footed wildlife seen each day. Indeed, at night and during the winter months, red deer can be seen feeding and seeking shelter in the fields and on the lower moorland slopes.

Bird life is certainly much more abundant and one recent visitor is reported to have encountered more than 40 different species during a short afternoon’s walk along the banks of the River Coe!

Raven and Buzzard are regularly to be seen and heard soaring high overhead. Golden Eagles are less common and keep to the remoter areas south of the main mountain mass – reports of their sightings are often mistaken for those of Buzzard for it is difficult to distinguish between the two when the birds are seen at a distance. 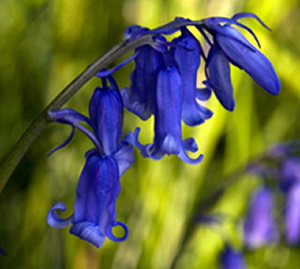 Snow bunting and ptarmigan are encountered regularly on the high peaks, and on the edge of the Rannoch Moor there are many grouse, blackcock, curlew, golden plover and snipe. The numbers of wild duck and whooper swans to be seen on Loch Achtriochtan are also increasing each winter.

But for a few isolated pines to be seen near Loch Achtriochtan, in common with the rest of Scotland, much of the old Caledonian Forest has long disappeared. Some new stands of conifer have been planted. The only deciduous woodland of any significance lies beside the river near Glencoe village. In consolation one must say that they do provide a wonderful splash of colour in early Autumn.

The traditional moorland grasses are dominant on the lower mountain slopes, with ling and heather on the hills up to around 2000 feet. Lower down there is an abundance of bog myrtle and cotton grass and, in the wetter places on the sides of pools, there is bog asphodel, butterwort, sundew and bladderwort.

On the high mountains, tucked away on ledges away from the all-devouring sheep, can be found a marvellous variety of typically alpine species such as wood anemone, sorrel, wild hyacinth, common violets, saxifrage and lady’s-mantle.