Clachaig has been around for a very long time. That much we know. Anecdotal tales keeping popping up detailing the many associations with Clachaig over the years. So, we thought that it was about time we documented some of the detail.

For starters, here’s what was happening at Clachaig over 100 years ago. 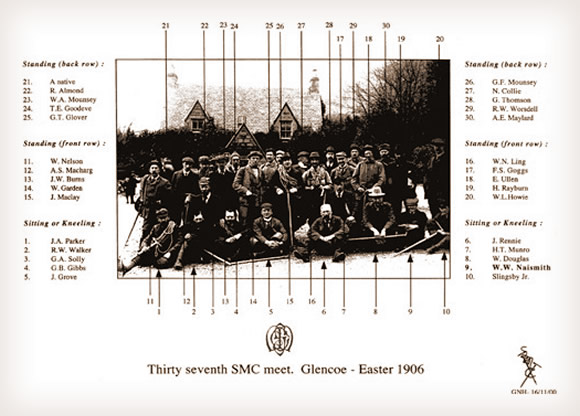 Clachaig has long since claimed to be at the heart of Scottish mountaineering and here’s a little evidence to support that claim. If you can read the names you soon see that its a veritable who’s who of gentlemen climbers of a time gone by. Collie, Munro, Naismith, Slingsby, Glover… just some of the many names associated with the pioneering routes made in Glencoe.

Further back still, we came across an entry in the District of Glencoe & Appin Marriage Register. On 13th August 1866 Malcolm McIntyre, a fox hunter from Auchtreachtan (presumably Achtriochtan – the farm just up the glen from Clachaig) married Janet Maclennan, an innkeeper at Clachaig.

The inn also gets a mention in the Register of Births. Two years previous to this, on 17th February 1864, Janet Maclennan gave birth to Duncanina at Clachaig.

So there’s 143 years of history already!

Here’s an extract from the obituary of Gordon Rees-Jones, which was brought to our attention by a customer with a keen interest in the link between Lochaber and the commando training in WWII.

Geoffrey Rees-Jones, who has died aged 90, was a founder member of No5 Commando and a Welsh international rugby player; a pioneer in the training of Special Forces during the Second World War, he subsequently had a distinguished career in the academic world.

Rees-Jones joined No5 Commando in July 1940 at its inception. The War Office was concerned by the lack of mountain troops and asked that soldiers with a knowledge of climbing come forward. Rees-Jones volunteered and was stationed at the Clachaig Hotel in Glencoe where he and his comrades ran a course for several months and proved to the War Office that ordinary soldiers could be turned into mountaineers. Comrades remember that he had a fine tenor voice and an inexhaustible repertoire of rugby songs.

The full obituary can be read on the GlencoeScotland blog. Fascinating stuff.

A couple of photos which date to around 1938, possibly a year or so later.

These were discovered in old family photo albums by Helen Keyte and are of her grandparents, presumably on a holiday in the area as there are other local scenes featured too.

Helen goes on to say,

“My Grandparents lived in Callander, having spent a large part of their lives in India. I assume they had a holiday in Glencoe as there are a few photos (not very good) of Glencoe and one of the Ballachulish hotel.

So, not a great deal has changed. Heading to the Highlands, and Clachaig of course, for a bit of of a break is obviously nothing new! Man yhanks for the photos, Helen. 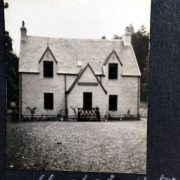 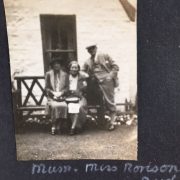 A big thank you to Vivienne Palmer for the photo of Clachaig in 1948 taken by her grandparents on a motorbike tour.

Vivienne says, My grandmother Betty Legg is on the bike and my grandfather David Legg must be behind the camera. The others are friends they were holidaying with. My grandfather was a very active member of the Rucksack Club so treks and mountain climbs around Scotland were the norm and the album includes photos of him clinging to mountain faces such as Ben Nevis with just basic ropes! 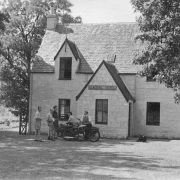 We’ve collected a few postcards over the years, but this one carries a little more of a back story, which is always great to hear.

Donald and Lucy Macphee took over the running of Clachaig as tenants of Lord Strathcona who owned Clachaig and indeed much of Glencoe and the surrounding lands until 1935. The rent was a princely £50 per annum.

Donald’s sister Annie sent the postcard during a visit to Clachaig in 1920 or 1921 and writes “Dear Bella, we are having a nice time here and the weather is very good. They are very busy here with people coming for lunch and tea. We are doing a lot of walking. Hope you are well. From Annie”

Word has it that the No Hawkers or Campbells was first put in place by Donald. Whilst we can’t confirm that we can say that it’s still there at reception now.

A huge thank you to Paul for the information provided. Read more fascinating history on his blog here. 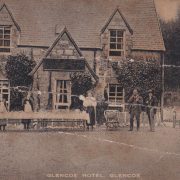 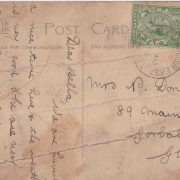 Kate found these lovely photos in an old family album labelled The Tour – September 1937. There’s no mistaking the views. Kate goes on to say:

“The Tour September 1937”.  My grandfather who was a doctor had died very suddenly in April 1937 and I think my mum and my uncle must have thought it would be a good idea to take my granny on a trip.  My uncle had just finished a medical degree at Edinburgh University and had obviously acquired his first car.  The Tour took in Rannoch, Loch Garry, Loch Ness, Glenmoriston, the Ballachulish Ferry, the Clachaig Inn, Glencoe, Loch Awe, Loch Earn and Loch Creran.  The family name was Saffley – Flossie (my granny), Robert (my uncle) and Betty (my mum).

Thanks. Lovely memories, and great photos too. 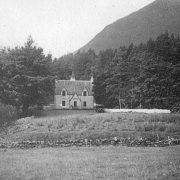 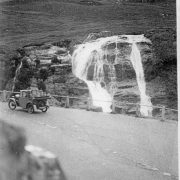 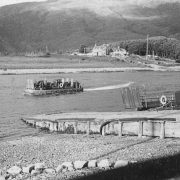 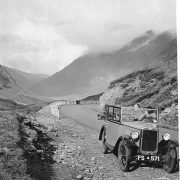 Whilst researching family history, Hamish McMillan discovered that his relatives form part of the ever growing Clachaig alumni.

Dad’s mother was Catherine (Kitty) McMillan who had six siblings one of whom was Annie McMillan. Annie married a John McEwan on June 3rd 1920 at the age of 34 and on the certificate she was listed as a domestic servant at , guess where? The Clachaig Inn.

Kitty in earlier records was also listed as a domestic servant so possibly could have been at the inn too which may explain why my Dad spent the first six months of his life there. She was eventually sent away to London and the 1911 census shows my father living with his grandfather in Inverness.

Later on he was brought up by John and Annie McEwan living at 20 Callart Road, Kinlochleven and he went on to work at British Aluminium in Kinlochleven, finishing as Deputy to the Technical Works Assistant in the Reduction Factory before making his way down to sunny Birmingham for a new career.

John McEwan worked at the same company for more than 30 years as driver of the electric locomotive running between the harbour and the factory.

Clachaig was part of the Strathcona Estate in 1920 though was run by tenant landlords as an inn. The estate was sold off in 1935, and Clachaig was bought by the newly formed National Trust for Scotland. It was subsequently sold on again to John B Fairlie in 1936.